The history of Loteria Brasil and games of Brazil Lottery stretch right back to 1784 when sweepstake style raffle games were first conducted.

The voting public decided on July 14th 1961 to allow games of Lottery to be operated within Brazil and since September 15th 1962 when the inaugural draw occurred – these have been run and administered by the Caixa Economica Federal Bank.

Two of the most widely-played Caixa Loterias were introduced in the 1990s – the Mega Sena and Loteria Quina followed by the Dupla Sena in 2001 – all of which are a part of the most solid and dependable range of lottery games in South America.

Loteria Quina was brought into the Caixa Loterias range of games back in March 1994. At the time the idea was to offer Brazilian Lottery players a game where they had the opportunity to pick their own lottery numbers as opposed to playing in a lotto sweepstake with pre-selected numbers – raffle type lotto games making up nearly all of the range that Caixa Economica offered in those days.

The Quina Loteria underwent a big change on October 5th 2009 when Caixa increased the number of draws to 6 every week – from Monday right through to Saturday. This meant a huge increase in the number of people playing and has turned Quina into one of the most popular Loterias da Caixa.

Every day – except from Sundays – the draw for the Caixa Quina is made at 8.00pm Brasilia time.

On June 24th each year – unless the date should fall on a Sunday – a special draw is held. This is the Quina de Sao Joao – Quina St.John – and boasts some amazing jackpot prizes which do not increase in size if there are no 1st division prize winners.

We have enjoyed taking a close look at the Quina Loteria from Caixa Econonica – the Brazil Lottery – and recommend carrying on down the page to learn in greater detail how to play...

Quina Loteria Brasil – How it Works

The Quina Loteria draw is made using a spinning, spherical cage into which 80 balls are placed that are numbered from 1 to 80. 5 winning numbers are drawn and your aim is to correctly match as many of these as you can.

A single matrix of 5/80 is used for the Quina Loteria which means that when you play – you need to select your 5 numbers out of a range of numbers from 1 to 80. If you succesfully match all 5 of the winning numbers you will win the Loteria Quina jackpot prize.

The Quina jackpot begins at R$ 500,000 and the amount will rollover and grow each time it is not won. There is no maximum limit to how big the jackpot can grow to and this top prize tends to rise in size quickly dut to the fact that there are 6 draws per week.

A standard play on the Loteria Quina is with 5 numbers but you can also increase your chances of winning by playing with 6 or 7 numbers which will cost a little more but give you better odds.

You can use a Quick Pick facility when you play – Surpresinha – which is the same as is used in most US State Lottery games or the Lucky Dip option that EuroMillions players use. Playing with Surpresinha means that your lottery shop or online ticket agent will use their computer to automatically choose your lottery numbers for you using their random number generator.

You can play Quina Loteria using the same numbers for up to 24 consecutive draws – just use the Teimosinha option and select the number of Quina draws that you wish to participate in.

Quina Loteria Brasil – Who Can Play?

Previously – only residents of Brazil were allowed to participate in any Brazil Lotto games. You needed to be a Brazilian citizen before you could play any of the Loterias da Caixa – including the Quina Loteria – and purchase your ticket from a Caixa Loteria outlet located in Brazil.

These days this is not a concern as legitimate and certified online lotto ticket sales organizations are readily available – such as TheLotter – that will allow you to buy your tickets and check the resultados Quina from pretty much any country on the planet.

If you do not live in Brazil this is fantastic news because it means that you can play Quina Loteria comfortably from your own home and buy lottery tickets online easily and without any problem.

Similar to most world lottery games – it is a requirement of Caixa Economica that you are no less than 18 years of age before
you can play any of the Caixa Loterias – including Quina.

For 6 days every week – from Monday right through to Saturday – Caixa Economica conduct the draws of the Quina Loteria at 8.00pm Brasilia time.

There are plenty of separate ways in which you can discover the latest Resultado Quina – Quina Results – to find out of you are one of the successful prizewinners.

The Resultado da Quina will be published in certain newspapers and broadcast on various radio stations throughout Brazil as well as being shown on Network TV across the country.

Very soon after the draw has taken place the Caixa website – www.caxia.gov.br – will also display the latest Resultados Quina and you can return to Global Lottery Review at your own leisure to see the Resultados da Quina in addition to the Resultado da Mega Sena and Resultado da Dupla Sena. 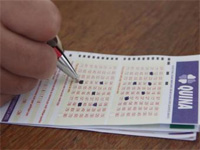 With the 3 prize divisions from which you can win on Loteria Quina and 6 draws per week there are certainly many thousands of prizes you can win every time that you participate. 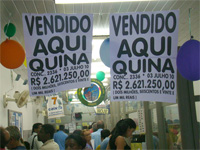 The 8th biggest Quina Loteria jackpot won so far has been an exciting R$ 12.67 MILLION by a lucky single winning ticket on December 21st 2011.

If you have been fortunate enough to have won a Quina Loteria jackpot – your winnings will be paid to you as a cash lump sum.

A 90 day expiry rule applies to all winning lottery tickets purchased for Loteria Brasil games. This means that you will need to claim your winnings within 90 days of the draw date before your ticket becomes invalid and your prize will be awarded by the national treasury to the Fund Student Financing of Higher Education.

Any prize that you have won on the Caixa Quina up to the value of R$ 1,787.77 can be claimed from any Caixa Loterias shop or at one of the Caixa Federal agencies.

All Loteria Brasil prizes of more than R$ 1,787.77 can only be claimed at one of the Caixa Federal agencies.

If you have won a prize of R$ 10,000.00 or more – you will be paid after 2 days of presenting your winning ticket at one of
the Caixa Economica Federal agencies.

None of these criteria will concern you if you play lottery with an authorized and lawful online lotto ticket sales company such as TheLotter as their job is to ensure that you are paid swiftly, correctly and without any complications.

Caixa Economica prides itself on supporting worthwile causes throughout Brazil and – prize money aside – this is exactly where profits go from the sale of tickets of Loteria Brasil games.

Education, sports, the arts, safety and culture are all areas that benefit from lottery spend in Brazil so even when you don't win – you can be sure that the money you have spent on your lottery ticket will most definitely be benefitting Brazilian society.