Brazil Lottery games were first played as far back in history as 1784 at which time the only lotteries available in the country were the sweepstake type of games.

Contemporary Brazilian Lottery games were first launched in 1962 when the government controlled Caixa Economica Federal Bank was given licence to create and oversee the operation of all Loterias do Brasil.

All Loterias da Caixa are created to produce profits that will be directed towards those areas of greatest need throughout Brazil – especially those such as health and education.

Caixa Economica Federal have various Brazilian Lottery games that it offers to the playing public – the most popular being the Mega Sena, Dupla Sena, Quina Loteria, Loteria Instantanea, Lotogol, Loteca, Loteria Federal, Timemania plus the richest of them all – the once-a-year Mega Sena da Virada which we shall be learning a lot more about on this page...

The idea behind the Mega da Virada was to create a Brazilian Lottery that would see out the old year and see in the new year which worked along the same lines as the already huge Mega Sena which and produce some of the biggest jackpots in the history of Caixa Loterias.

So – by taking some of the profits out of the existing Mega Sena throughout the whole year to build the prize fund of the end of year Mega da Virada would ensure that the New Years Eve lottery always boasted one of the largest top prizes to be won in the entire calendar of Brazil Lottery games.

The inaugural Mega Sena da Virada draw saw a massive top prize of R$ 144.9 MILLION which was won by 2 lucky ticket holders and proved to be just a taste of things to come – with a staggering record R$ 244.7 MILLION jackpot being generated for the New Years Eve 2012 drawing.

Towards the end of each year – the lottery hungry Brazilian population can't wait to see the Mega da Virada jackpot grow and grow with the majority of people taking part as well as many thousands from abroad.

The draw for the Mega Sena da Virada is made by Caixa Economica Federal on December 31st every year at around 8.00pm Brasilia time and the odds of winning are no different to that of the twice-weekly MegaSena.

We are very excited at having closely looked at the Mega da Virada in great detail and would certainly encourage you to read on to find out how to play and discover the staggering amounts that can be won... 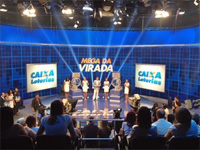 The Mega Sena da Virada draw on New Years Eve operates in almost the same way as the twice weekly Mega Sena draw does and also uses an identical matrix of 6/60.

This means that 6 numbers are drawn out of a range of different numbered balls from 01 to 60 and your aim is to select all 6 of the winning numbers to claim all or part of the very large jackpot prize.

There are 2 additional prize divisions that you can also win other great prizes on by picking 4 or 5 out of the 6 winning numbers.

The area where the Mega Sena da Virada differs from the weekly Mega Sena is that its jackpot does not rollover if not won.

The Mega da Virada jackpot must be won on the night and in the unlikely event that there should there be no top prize winners – the jackpot prize fund will be divided between the winners on the next winning prize level.

Twice every week throughout the year – 5% of all the profits generated by the MegaSena are put aside for the Mega da Virada draw with the overall prize pool growing as each week passes.

When you play Mega da Virada you can either choose your own numbers yourself or use the Supresinha facility and have the retailer or online computer select the numbers for you. This works in the same way as the Quick Pick does with USA Lottery games or the Lucky Dip in most European Lottery games and uses a random number generator to make an automatic selection.

Since the Mega da Virada loteria started as recently as 2009 – there has always been the option of players from overseas as well as from within Brazil itself taking part via accredited and genuine online lottery ticket sales companies on the web like TheLotter.

Prior to this – only lottery players from within Brazil could participate in any of the Caixa Loterias – players from abroad could only look on with envy and excitement as they saw the big Brazilian Lottery jackpots being won by Brazilan residents alone.

So – for all lottery players who do not live in Brazil but still wish to take part in the momentous Mega da Virada draw each year – the good news is that you can easily do so from just about anywhere in the world if you buy lottery tickets online.

In line with the majority of lottery games around the world – you will have to be a minimum of 18 years old in order to play Mega Sena Virada – this also applies to all Loterias da Caixa including the weekly Mega Sena, Dupla Sena and Loteria Quina.

Every New Years Eve the Caixa Economica Federal bank conduct the drawing of the Mega Sena da Virada and this once-a-year special event is enthusiastically looked forward to byhundreds of thousands of Brazilian Lottery players right across the whole country and also throughout the entire lottery playing world.

On December 31st each year Caixa draws the Mega da Virada at approximately 8.00pm Brasilia time and there are a number of methods you can use to see if you are among the winning ticket holders and check the Resultado Mega Sena da Virada.

The latest Resultado Mega Sena da Virada will be shown on the official website of Caixa Economica Federal – caixa.gov.br – shortly after the drawing has occurred plus it will be broadcast live on Brazilian Television.

Newspapers right across Brazil will also publish the Resultado Mega Sena Virada with radio stations also broadcasting the most up to date results of this very important Loteria Brasil draw.

Here at Global Lottery Review you can also check the latest Resultado Mega Sena da Virada in addition to any of the past Resultados Mega Sena Virada right back to its first draw in 2009.

The lottery odds of winning on the Mega da Virada are exactly the same as on the twice weekly Mega Sena draw and the number of winning prize levels is also the same with 3 separate ways that you can win something on this great News Years Eve lottery.

For correctly selecting all 6 of the main winning lotto numbers and winning one of the huge Mega da Virada jackpot prizes – you have odds of 1 in 50,063,856.

The odds reduce greatly to just 1 in 154,518 for you winning a Mega da Virada prize on the 2nd level by choosing 5 of the 6 winning lottery numbers drawn. 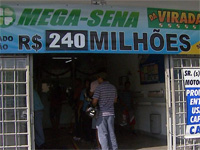 Every New Years Eve the majority of the Brazilian population keenly awaits the drawing of the Mega da Virada which produces the biggest prizes by far to be won throughout the whole year of Brazilian Lottery games.

The biggest jackpot to date that has been won on the Mega Sena da Virada has been the massive sum of R$ 263.29 MILLION which was won on December 31st 2014 by 4 lucky winners – 2 from Sao Paulo, 1 from Brasilia and 1 from Santa Rita doTrivelato.

The 2nd largest jackpot that has been won on the Mega Sena da Virada so far has been the huge amount of R$ 244.7 MILLION which was won on December 31st 2012.

Since its introduction in 2009 the Mega da Virada has created these other fantastic jackpot prizes...

R$ 224.6 MILLION on December 31st 2013 which was won by 4 ticket holders from Curitiba, Palontina, Teofilandia and Maceio.

R$ 244.7 MILLION on December 31st 2012 which was won by 3 winning tickets from Sao Paulo, Franca and Aparecida de Goiania.

R$ 177.6 MILLION on December 31st 2011 which was won by 5 Brazil Lottery players from Belem, Carmo do Cajuru, Maua, Brasilia and Russas.

R$ 194.3 MILLION on December 31st 2010 which was won by 4 ticket holders from Fazenda Rio Grande, Pinhais, Belo Horizonte and Cariacica.

R$ 144.9 MILLION on December 31st 2009 which was won by 2 winning tickets from Santa Rita do Passa Quatro and Brasilia.

If you win a jackpot prize on the Mega da Virada – you will receive your prize money as a cash lump sum payment.

There is a 90 day expiration period for all winning lottery tickets purchased from Brazil Lottery and Caixa Economica – therefore you must file your winning claim no later than 90 days from the draw date otherwise your ticket will be void and you will lose out on your win.

You can claim any prize of no more than R$ 1787.77 on the Mega da Virada from one of the Caixa Federal Bank agencies or from any of the thousands of Loteria da Caixa retail outlets.

Any prize that you have won in excess of R$ 1787.77 will need to be claimed from one of the agencies of the Caixa Federal Bank.

You will receive payment of your winnings following 2 days of the presentation of your winning lottery ticket at one of the agencies of Caixa Economica Federal if your prize is R$ 10,000.00 or more.

Matters of receiving a winning payment will not be an issue for you should you decide to play lottery online with an official and fully authorized lottery ticket sales organization such as TheLotter because one of their main obligations is to see that you are given your winnings quickly and efficiently.

Like other Loterias da Caixa – after administrative costs – leftover profits from Mega da Virada ticket sales is channelled towards various worthy causes that benefit the population of Brazil such as the areas of health, education, security, sport and culture.

Click Here to Read about OTHER LOTERIAS da CAIXA