"The HOT LOTTO – Every Wednesday and Saturday from the MUSL"

The Hot Lotto is one of the main games offered by the MUSL and is a traditional, jackpot-style lottery game which was introduced on the 10th anniversary of Powerball lottery back in 2002.

The idea behind this game was to give some of the smaller USA States the opportunity to create larger sized jackpots that are enjoyed by the main single-State lotteries such as the California Lottery, NY Lotto and FL Lottery.

Jackpots for the HotLotto begin at $1 Million and Rollover each time they are not won. That figure is then added onto the following draw’s jackpot and increases in size each draw by a minimum of $50,000 until somebody wins it when it will revert to the starting jackpot sum of $1 Million once more.

The draws take place on Wednesdays and Saturdays at 9.59pm Central Time – the same days as drawings for the Powerball.

The USA lottery game – Hot Lotto – is run and coordinated by the Multi-State Lottery Association (MUSL) a non-profit, government-benefit association formed by an agreement with its member US lottery companies.

The MUSL was formed in 1987 to administer multiple-State USA Lottery games across the Unites States of America.

The MUSL itself is also owned and operated by 33 participating US State Lotteries and manages the finances for each game. It also provides other games to its member lotteries including Powerball, Wild Card2 and 2by2.

Each individual State lottery retains all profits made which are used to fund projects approved by the State legislatures.

As well as the existing 33 USA Lottery members of the MUSL – there are 11 further US Lottery companies that are now licensed to sell MUSL lottery tickets for the flagship Powerball game.

This increased the number of USA State Lottery companies offering the Powerball from 33 to 42 in January 2010 with the Ohio Lottery and Arizona Lottery joining in April 2010 and finally the California Lottery in April 2013. This means you can now play Powerball across America in 45 different US States & districts as well as from overseas when you play Powerball Online.

In theory – this should mean that all USA State Lotteries that are members of the Mega Millions consortium and sell Mega Millions tickets should now ALSO be able to sell tickets for the Hot Lotto. At the moment, however, it is not known whether Mega Millions consortium members will be doing this. If they DID begin to offer the HotLotto it would take the number of US States and districts where you could buy HotLotto Tickets from 16 (currently) to 28.

Hot Lotto – How it Works

If you match all 5 main numbers plus the “Hot Ball” drawn then you will be a jackpot winner.

If no-one successfully matches the winning Hot Lotto numbers then the jackpot will rollover each draw and increase in size by a minimum of US$ 50,000 until it is won.

In addition to the actual jackpot itself, there are 8 further ways in which you can win on the HotLotto, giving you many more chances to win than the average in-state USA lottery game offers.

A Quick Pick facility is available when playing the HotLotto, very much the same as the Lucky Dip option that is used in the UK National Lottery or Europe’s EuroMillions or many other USA lottery games – which means that you can ask the lottery retailer or computer to randomly select all your HotLotto numbers for you.

This automatic selection procedure can apply either to the 5 main lottery numbers – to the “HOT Ball” on its own or to both.

So, playing this Lottery is very simple…just select your own 6 main numbers or request the computer to generate them for you with its Random Number Generator by selecting Quick Pick/Easy Pick.

The cost of playing the HotLotto is the standard entry fee of $1.00.

The Hot Lotto Sizzler is a multiplier option introduced in January 2008 where you can choose to increase your winnings on every level except the jackpot itself when you play HotLotto.

The Sizzler is a prize multiplier that will enhance the amount of your win on all of the 8 non-jackpot prize tiers – all you have to do is ask for the Sizzler option when you buy your Hot Lotto ticket.

Quite simply the Hot Lotto Sizzler will treble your winnings – there is no random number generator used here – just a cool and straightforward 3x multiplication of whatever prize you have won.

The Sizzler option was initially not available to DC Lottery and Idaho Lottery players but is now offered by all 16 States and Jurisdictions that participate.

Hot Lotto – Who Can Play?

Like most USA Lottery games, previously only citizens living in the States that participate in these MUSL games were allowed to play in any of the lotteries that they offered – including the HotLotto – you used to have to purchase your tickets from an authorized retailer based in one of the participating US States.

Nowadays, though, there are a good number of online lottery ticket sales companies such as TheLotter, WinTrilions and Congalotto who are both authorized and genuine – you are able to select your Hot Lotto numbers online and purchase your tickets from pretty much anywhere in the world.

This is good news of course if you live outside of the USA and want to play the game and ensure your entry into the next drawing or just want to have the convenience and ease of being able to buy lottery tickets online.

The following is a list of the current U.S. States that are members of the Multi-State Lottery Association (MUSL) and participate in the Hot Lotto along with the dates that they joined. There are currently 16 members… 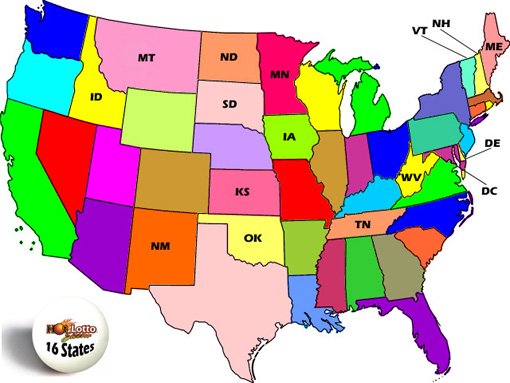 The HotLotto is drawn at 9.59pm Central Time right after the Powerball is drawn every Wednesday and Saturday evening.

Draws for the Multi-State Lottery Association HotLotto game take place in the Iowa HQ of the MUSL which is where the Powerball was drawn until it moved to Florida in 2009.

You can find out the winning HotLotto numbers in numerous ways to see if you have become one of the lucky winners.

The Hot Lotto results will be published in various newspapers throughout the 16 member States and will also be displayed on each of the websites of the participating USA Lottery companies.

You can also check the latest HotLotto Numbers right here at Global Lottery Review where they will be shown after the draw. 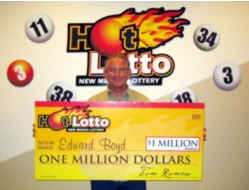 The odds of winning on the Hot Lotto are extremely competitive when compared to many of the US lotteries, especially the other huge Multi State Lottery games of Powerball and Mega Millions.

The chances of you winning the Hot Lotto jackpot prize for correctly matching the 5 main winning lottery numbers plus the Hot Ball are 1 in 29.14 million.

For one of the prizes on the 2nd level, the odds come in at a better 1 in 1.6 million for matching the 5 main numbers.

Finally the odds of a 9th tier prize are just 1 in 34 for matching just the Hot Ball – yes – you can win by matching only 1 number!

The overall odds of you winning any HotLotto prize are very good at 1 in 17. See below for a full table of Hot Lotto Odds & Prizes... 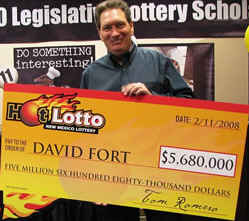 John Hall from Indianola, Iowa holds the honour at the present time for winning the largest ever Hot Lotto jackpot to date when he scooped US$ 19.97 Million back on January 13th 2007.

The 2nd biggest HotLotto jackpot to have been won so far has been the US$ 16.69 Million top prize won on August 22nd 2009 by an unnamed lottery player from the State of Delaware.

Other big HotLotto jackpot wins include the US$ 10.8 Million won on September 15th 2004 in Minnesota – the biggest at the time.

Also – the second highest HotLotto jackpot at the time was won on June 15th 2005 by Shirley and Luverne Vehle from Sioux Falls, South Dakota after it had reached a cool US$ 9.13 Million.

Hot Lotto – How Jackpots are Paid

As a Hot Lotto jackpot winner you would be paid your winnings in the form of a cash lump sum. Up until May 11th 2013 an annuity option for jackpot wins was available but this was discontinued from the draw on May 15th.

Depending upon which State you purchase your Hot Lotto ticket in – you will need to claim your prize within a period that ranges from 90 days to 1 year from the date of the draw taking place.

Winning HotLotto tickets bought with the New Mexico Lottery will need to be claimed within a period of 90 days from the draw.

For Montana Lottery players – the time limit for claiming HotLotto prizes is a straight period of 6 months from the date of the draw.

Players with the Delaware Lottery, Iowa Lottery, Kansas Lottery, Maine Lottery, Minnesota Lottery, New Hampshire Lottery and Vermont Lottery have the longest period of up to 365 days from the date of the draw taking place to claim their HotLotto prize.

If you play lottery online however – whatever your win – none of this will not be a concern for you, as your authorized lottery ticket sales company such as WinTrillions will take care of everything.