"The SuperEnalotto - One of the BIGGEST European Lottery Games..."

The SuperEnalotto is the flagship Italy Lottery game – in a country which has numerous lotteries that are drawn right across the land across various regions.

Within the Italian Lottery system, there are 10 individual, regional lottery games that are run and operated by Lottomatica and drawn in several cities – Bari, Cagliari, Milan, plus Florence, Genoa, Naples, Palermo, Rome, Turin and Venice.

The Super Enalotto is much bigger than these regional Italy Lotto games and is run by SISAL – a separate, private Italian company.

Up until June 30th 2009, Sisal used some of the numbers drawn in the Lottomatica regional draws for the SuperEnalotto numbers.

Quite often, the Sisal SuperEnalotto produces what is the biggest European Lottery jackpot – sometimes this is the biggest jackpot in the world at any one time, beating EuroMillions & EuroJackpot.

SISAL S.p.A. is a private Italian company that has been working for the Italian public and State in the areas of betting & gaming management for more than 70 years now.

SISAL began its operations back in May 1946 & was responsible for bringing the whole concept of modern gaming into the Italian market when it launched its initial game which was a pool game that was created around the concept of Italian football matches.

There are many Lotto Italia games offered by SISAL which include poker, bingo, casino, slots, & quick games plus lotteries VinciCasa, SiVinceTutto, Win For Life, Play Six, Gratta e Vince, 10eLotto, the Italy Lotto – Lottomatica – MillionDay, SuperEnalotto SuperStar, EuroJackpot and the most popular game of all – SuperEnalotto.

In April 1996 the bid of SISAL to become the new operator of the biggest & most popular Italian Lottery game – the Enalotto – was accepted by the Italian Ministry of Finance after it was the winner in a state competition set to decide who the tender should go to.

In summary, it then turned into one of the biggest lottery games in Europe, surpassed only by EuroMillions and we are pleased to be giving the SuperEnalotto a full and detailed review right here.

The SuperEnalotto is a reincarnation of the highly popular Enalotto which had been operational since way back in the 1950s and is the most popular & widely played game in the Lotto Italia portfolio.

When SISAL first won the tender for running the Enalotto in 1996 it proposed some exciting changes to the game’s formula, making it simpler, more appealing to players and with the prospect of even bigger jackpots. The Italian Minister of Finance agreed to these changes on October 30th 1997 and the SuperEnalotto was born.

This brand new version of the long-standing Enalotto game was invented by a Swiss, Rodolfo Molo, who’s Father, Geo Molo, was actually one of the co-founders of SISAL back in 1946 – showing that the family have a long tradition in the Italian gaming industry.

As the SISAL company president, Rodolfo teamed up with various specialists to formulate an Italy Lottery game which would produce massive jackpots with staggering stakes & was easy to play. He did just that & the Super Enalotto has since proved to be the most popular Italian Lottery game and one of the richest across Europe.

The first Super Enalotto draw took place on December 3rd 1997 & it grabbed the Italian population’s attention right from the very start becoming an instant hit with both the public as well as the media.

The ethos of the Sisal SuperEnalotto is similar to that of Spain’s El Gordo where the wealth is spread across a much wider section of the people than is normal with most national lottery games. This logically means the jackpot winning odds are longer than most too.

Due to the stakes involved plus the jackpots produced, it is highly common for whole families and even entire villages to pool all their money together for a whole bunch of tickets. This has made lucky Super Enalotto winners out of very large groups of people & more people overall do win on this lottery than in the majority of others.

SuperEnalotto – How it Works 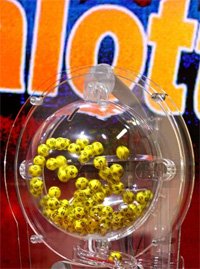 The Italian SuperEnalotto lottery uses a single matrix of 6/90 which means that you need to choose 6 numbers out of a number range from 1 to 90 and aim to match your numbers with those drawn by Sisal. If you correctly match all 6 of the numbers you will win the jackpot.

The draw for the Super Enalotto used to work in quite a different way to the majority of other world lottery games.

Since July 1st 2009 all Sisal SuperEnalotto numbers have been drawn separately and have no connection with the regional draws.

In addition to the 6 main numbers a Jolly Number is drawn which is used to determine all winners on the 2nd prize winning category.

A SuperEnalotto SuperStar number is also drawn separately which will increase a jackpot win by € 2 MILLION and a 2nd prize win by € 1 MILLION & multiply other prizes by anything from 10x to 100x.

So to play SuperEnalotto is very easy – simply choose your own 6 numbers or use the Quick Pick facility – requesting the computer to select them for you by using its own random number generator.

The SuperEnalotto jackpot starts off at a minimum of € 2 MILLION & each week that it is not won it will rollover – the increase being added to the next draw making for some massive jackpots to win.

Due to the fact that the guess-range is so wide, rollover draws and huge SuperEnalotto jackpots are very common & they are often some of the largest jackpots in Europe and even across the world.

Playing SuperStar SuperEnalotto increases the number of ways you can win prizes from the standard 6 right up to a total of 14.

Draws for the Super Enalotto take place three times per week on Tuesdays, Thursdays and Saturdays all at 8.00pm Italian time.

The cost of playing the Super Enalotto is just € 1.00 per play and to add the SuperStar option costs just an extra € 0.50 per entry.

SuperEnalotto – Who Can Play? 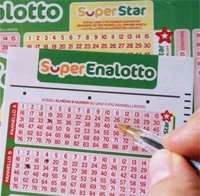 Similar to the majority of all European Lottery games, plus those in the USA and across the world, previously only residents living in Italy were allowed to play in any of the Italian Lottery games including the SuperEnalotto – you used to have to purchase your lottery tickets from an authorized seller based in Italy.

Nowadays however, with the presence of authorized and genuine online lottery ticket sales agencies such as TheLotter you are able to select your Super Enalotto numbers online & purchase your tickets wherever you are living in the world.

This is fantastic news of course if you live outside of Italy & want to play SuperEnalotto and ensure your entry into the next draw or just want to have the convenience and simplicity of being able to buy lottery tickets online from the comfort of your own home.

Once you have entered into draw, you can then very easily check the SuperEnalotto results online to see how you have done & to find out if you have become one of the Super Enalotto winners.

You must be at least 18 years of age to be eligible to purchase a ticket for any Italian Lottery game including the Super Enalotto.

There are a number of different ways that you can find out the very latest SuperEnalotto results and see the winning numbers drawn.

Unfortunatley, the Super Enalotto draw is not broadcast on TV but the risultati SuperEnalotto are shown on Sisal's station – Sisal TV.

You will also be able to find the SuperEnalotto risultati in numerous newspapers, where they will be published following every draw. 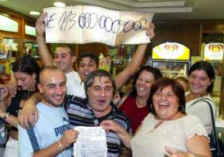 The odds of you winning the jackpot on the SuperEnalotto are long which is just why the jackpot prizes can be so massive, prompting players from right across Italy, Europe and even around the world to play the game.

Unusual for a National Lottery, but the only odds that compare to these would be those from a multi national game like EuroMillions, EuroJackpot, Mega Millions and US Powerball, all of which regularly produce huge jackpot figures.

The odds of you winning a SuperEnalotto jackpot for successfully matching all 6 of the main winning numbers are 1 in 622,614,630.

The likelihood of you winning a 3rd level prize is 1 in 1,250,230 for matching 5 of the primary winning Super Enalotto numbers drawn.

A prize on the 4th winning level commands odds of 1 in 11,907 for correctly matching 4 of the primary winning lottery numbers drawn.

For a prize on the 5th level, the odds are much better at 1 in 327 for selecting just 3 of the winning Super Enalotto numbers drawn.

The 6th and final prize level offers odds of just 1 in 22 for correctly matching only 2 of the primary winning Super Enalotto numbers. 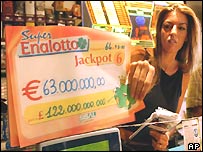 In October 1998, barely a year after the SuperEnalotto was first launched, 100 players – almost the whole village of Peschici – made lottery history and created a record when they shared a huge jackpot win of € 32,706,977.38.

The SuperEnalotto jackpot record win was broken once again on October 23rd 2008, when a player from Catania scooped a top prize of € 100,756,197.00. This was also the record figure for an individual win. In American dollars this equated to $ 128 MILLION

The next massive jackpot of the Sisal Super Enalotto resulted in the largest ever Super Enalotto win of the time – actually it was the biggest lottery win in European lottery history at that time. On August 23rd 2009, after months of rolling over, the SuperEnalotto jackpot reached an incredible € 147.8 MILLION and was won on a single ticket by a resident from the small Italian town of Bagnone.

This massive prize was beaten on October 30th 2010 by a lucky lottery syndicate of 70 players who won € 177.8 MILLION making it the highest SuperEnalotto jackpot at the time that it was won.

To date, the biggest SuperEnalotto jackpot in history has been the massive € 209,160,441 that was won on August 13th 2019 by a winning ticket that was purchased from a bar in Lodi, Lombardy.

SuperEnalotto – How Prizes are Paid

Sisal pay out all winnings of its Italian Lottery games in the form of cash or cheques & in the case of particularly large amounts, as a bank transfer.

You have up to 90 days from the date of the draw taking place to make your prize winning claim before your ticket will then become invalidated.

If you have won any prize of up to € 520, you will be able to make your claim from any of the 39,000+ Lotteria Italia retailers in Italy.

If you have won between € 520 and € 5,200, you can make your claim at the Italy Lottery retailer from where you purchased your ticket, from a dedicated payment center or from the Sisal Offices.

If you have won anything between € 5,200 and € 52,000, you will need to claim your prize from a Sisal dedicated payment center or from either of the two principal Sisal Offices in Milan or in Rome.

If you have won an Italy Lottery prize of more than € 52,000, you will have to visit one of the Sisal offices in Milan or Rome to claim.

If you play lottery online however, whatever your win, this will not be a concern for you, as your accredited lottery ticket sales agency will take care of all this for you, be that TheLotter or any company.

Lotteria Italia – Where the Money Goes

A portion of the revenues and proceeds generated by SISAL from all Super Enalotto lottery ticket sales goes towards numerous good causes plus charities that benefit the entire population of Italy, with some funds also going towards funding for the Italian government.

Click Here to PLAY in a SuperEnalotto Syndicate NOW

Click Here to Read about OTHER Italy Lottery GAMES