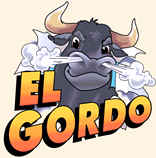 The Loteria De Navidad - is one of the oldest lottery games in existence around the world today.

It is known by various different names which can be confusing, such as the Sorteo de Navidad, Loteria de Navidad, El Gordo de Navidad, Sorteo Extraordinario de Navidad, Spanish Christmas Lottery, The Fat One and the El Gordo Spanish Sweepstake Lottery.

The El Gordo is run by the Spanish public body - Loterias y Apuestas del Estado - and is part of the protfolio of Spanish Lotto games offered by the Spanish National Lottery - known as the Loteria Nacional in Spain.

It has been run every year since its first drawing on Decenber 18th 1812 and takes place once a year - these days on December 22nd. The name Sorteo Extaordinario de Navidad has been in use since the year 1892.

Many lottery players around the world incorrectly believe that the lottery itself is called El Gordo. However - in the Spanish language this means “The First Prize”, literally “The Fat One” or even more accurately meaning “The Big One”.

This is made more clear when it is understood that the climax of the whole draw for the El Gordo Spanish Sweepstake Lottery (Loteria de Navidad) - which takes a good few hours - is when the “Gordo” itself is drawn - ie. The First Prize. 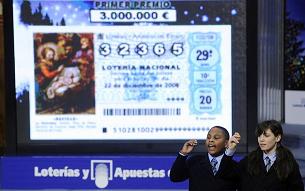 The El Gordo Spanish Sweepstake Lottery - Loteria de Navidad - is so popular in Spain each that each Christmas it is believed that an incredible 98% of the Spanish population have got lottery tickets for it.

As Spanish Lottery games have been around in some form or other since 1763, it is easy to understand how they have become an intrinsic part of the psyche of the Spanish population.

There is possibly no other country in the world where lotteries play such an important part of people’s lives as those in Spain - and these days this news has spread and Spanish Lotto games are now played by people far and wide across the rest of the lottery playing world too.

This being the case, it is only natural that the El Gordo Spanish Sweepstake Lottery around Christmas time, should be the absolute firm favourite out of all the games offered throughout the year by the Spanish National Lottery - Lottery Nacional.

This is simply because of the huge prize funds that the El Gordo draw has to offer - without doubt the biggest lottery prize pools in the world - with BILLIONS to be won at Christmas time making it one of the most exciting world lotteries of them all.

In 2014 the massive prize fund stands at an absolutely incredible 2.52 BILLION EUROS - that’s a lot of money to be won! 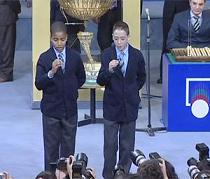 The way the El Gordo draw takes place has not changed since its inception in 1812.

Each December 22nd in Madrid amid an enthralling fanfare, pupils from the school - San Ildefonso - are recruited to conduct the draw in front of a huge audience watching both in Spain and abroad.

The chosen pupils from San Ildefonso pick out the thousands of winning numbers and corresponding prizes for the El Gordo Spanish Sweepstake Lottery one by one - actually singing the results out to the watching public.

This makes for a complete El Gordo lottery extravaganza that can take many hours throughout the day since there are so many winning lottery numbers and prizes to be drawn and determined.

El Gordo – The Draw Itself 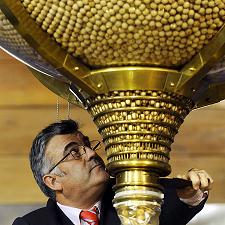 When making the lottery draw for the Loteria de Navidad - the El Gordo Spanish Sweepstake Lottery - two separate spherical vessels are used with each containing many thousands of small wooden lottery balls.

The larger of the two El Gordo drawing vessels contain lottery balls with 5 digit numbers that are printed on each of the lottery tickets for the Sorteo Extraordinario de Navidad - El Gordo.

The smaller vessel contains thousands of lottery balls each with a prize amount on that - when picked following the drawing of a 5 digit numbered ball from the first vessel - will determine the prize to be won by the lucky person/s who have the ticket/s bearing. those correct winning lottery numbers.

The San Ildefonso pupils who ring out the winning numbers and prizes with their singing are applauded as they do so but especially when they draw the higher El Gordo prizes when they repeat their singing numerous times.

The pinnacle of the whole El Gordo de Navidad draw is when the actual “Gordo” itself is drawn - ie. “The First Prize”, “The Big One” or “The Fat One”.

The system of using 2 spherical drawing vessels was historically used for all Spanish Lotto games but is now used solely for the Spanish Christmas Lottery - the El Gordo. 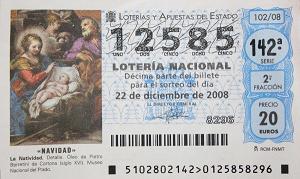 Different from most of the other jackpot lottery type games and even from other Spanish Lottery games like La Primitiva - Loteria Primitiva - and the big Sunday lotto - the El Gordo de la Primitiva - the El Gordo Spanish Sweepstake Lottery is run more like a giant raffle with an incredibly high pool of lottery prizes.

The other Spanish Lotto game that operates this way is the main Spanish National Lottery weekly game - Loteria Nacional.

As the El Gordo Spanish Sweepstake Lottery is such a huge game, the numbers printed on each of the lottery tickets are all available multiple times and are broken down from “Billettes” (or “Series”) down into “Decimos” - which can sound confusing.

Each El Gordo lottery ticket number is available 10 times meaning that 10 lots of tickets with the same numbers will be printed. Each of these “lots” is called a “Serie”.

Each of these 10 “Series” is then broken down into whole tickets - called “Billettes” - and as these are fairly expensive the “Billettes” are broken down further into 10 smaller tickets called “Decimos”.

So anyone playing the El Gordo lotto can purchase either a whole ticket - a “Billette” - or as many “Decimos” - tenths of tickets - as they like. 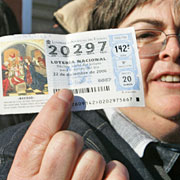 El Gordo Spanish Sweepstake Lottery ticket prices can vary considerably dependant on where you buy lottery tickets for the game from.

If you buy lottery tickets for the El Gordo from an outlet in Spain itself the cost of a whole ticket - “Billette” - is 200 Euros and the cost of a tenth of a ticket - a “Decimo” - is 20 Euros.

If you buy lottery tickets online these prices will tend to rise sharply in most places and you would very typically be paying anything from 200 to 500 Euros for a whole “Billette” and for a "Decimo" - from 20 to 50 Euros.

As these can be fairly hefty sums for the average lottery players to pay, it is normal for whole families, offices or even entire villages in Spain to pool their resources and buy whole “Billettes” together as a group.

Playing as part of a lottery syndicate in a similar manner to that mentioned above is an ideal way to share the cost of playing at the same time as being able to increase chances of winning lottery games such as the El Gordo due to the much enhanced buying power that the syndicate provides.

The best place on the internet we have found to join one of these lottery syndicates is to play El Gordo online with one of the El Gordo syndicates offered by Big Fat Lottos.

You can play the Loteria de Navidad - El Gordo - at a fraction of the normal cost and team up with a syndicate who are playing to win shares in the RICHEST lottery pool in the world.

If you would like to learn more about these El Gordo syndicates that are offered by BigFatLottos just Click Here.

The El Gordo Spanish Sweepstake Lottery at Christmas time is just one of 11 special of the Spanish Lotto Superdraws - Sorteo Extraordinario or Sorteo Especial - that the Spanish National Lottery - Loteria Nacional - offers each year.

El Gordo is, of course, the biggest but the other draws are themselves massive and attract a lot of attention from the Spanish Lottery playing public and millions abroad each and every year.

There are 3 truly massive Spanish National Lottery Superdraws in the calendar and these are known as Sorteo Extraordinario draws.

The first one happens soon after the El Gordo de Navidad has taken place on December 22nd - and is the El Nino which takes place in January.

The El Nino lottery takes place on January 6th each year and - in 2015 - will have a minimum prize fund that will total an amazing 560 MILLION EUROS.

The other 8 monthly Spanish Lotto Superdraws take place every month except the 3 months mentioned above (apart from August) and are known as Sorteo Especial draws. These lotteries each have prize pools that carry an impressive 84 MILLION EUROS.

Please note that the El Gordo - Loteria de Navidad - Christmas Lottery draw is not to be confused with the El Gordo de la Primitiva which is a weekly lottery held on Sundays each week. Both are run by the Spanish National Lottery - Loteria Nacional.