The El Gordo Primitiva from the Spanish National Lottery is one of many different lottery draws that are run by Loterias y Apuestas del Estado and governed by the Spanish Government as part of the overall Loteria Nacional.

The term El Gordo is typically associated with the massive Christmas draw held every year in Madrid, Spain, on December 22nd. The Loteria de Navidad – El Gordo sweepstake lottery – is so well known because it has one of the largest lottery prize funds available on earth which runs into the BILLIONS.

However – the El Gordo lotto term also applies to this Spanish National Lottery Sunday draw which takes place every week throughout the year.

This lottery is drawn every week on Sundays at 9.30pm CET (Central Eurpoean Time) and is made in the Spanish capital, Madrid.

Jackpots for the El Gordo Primitiva start off at a minumim figure of €5 Million and each time it is not won the top prize will increase by way of a rollover and this will continue until someone wins.

Having taken a good look at all of the lottery products in the Spanish National Lottery - Loteria Nacional - portfolio, we are happy to recommend the El Gordo Primitiva as one that would be well worth a flutter if you are considering which one to play in.

The El Gordo de la Primitiva uses what’s known as a double matrix – one of 5/54 and then a second one of 1/10 - which means that when playing this Spanish Lotto you will first need to select your 5 main numbers out of a range of numbers from 1 to 54 and then select an Additional Number out of a range from 0 to 9.

If you match all 5 of the main numbers and plus the Additional Number you will be an El Gordo Primitiva jackpot winner.

There are many other cash prizes to be won too and in total there are 9 different ways in which you can win on this Spanish Lottery.

An option is available when playing the El Gordo de la Primitiva similar to the “Lucky Dip” that is used in the UK National Lottery or Europe’s EuroMillions – which means that you can choose to let the computer randomly select your numbers for you if you using its own lottery number picker.

So – playing the El Gordo Primitiva is simple – just select your own 6 numbers or let the computer generate them automatically for you by using its random number generator.

Each entry on the El Gordo Primitiva game costs just €1.50. 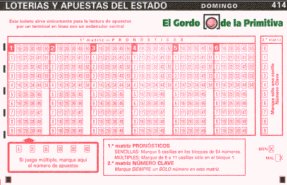 Previously to play in any games run by the Spanish National Lottery – Loteria Nacional – you would have to be a resident of Spain but now that you can buy lottery tickets from global online lottery ticket sales companies such as TheLotter you can easily participate from anywhere in the world.

This is excellent news if you live outside of Spain but want to play in some of the world’s biggest lotteries and ensure your entry into the next draw or just simply wish to enjoy the convenience of being able to buy lottery tickets online for the Spanish Lottery.

Once you have entered into the El Gordo Lottery, you are then easily able to check your Spanish Lottery results online to see how you have done.

You must be 18 years of age to be eligible to purchase a ticket for any of the Loteria Nacional - Spanish National Lottery games.

The El Gordo de la Primitiva is drawn by the Spanish Lottery once each week on a Sunday at 9.30pm CET.

There are numerous ways you can find out the latest results of the EL Gordo Primitiva to see if you have struck lucky with the winning lottery numbers drawn.

The El Gordo Primitiva Results will be shown on certain Television stations throughout Spain and will be published in various newspapers.

In addition to this you can come back to Global Lottery Review at any time to check the latest El Gordo de la Primitiva Results or visit the official Spanish Lottery website – loteriasyapuestas.es – where trhey will also be displayed.

The odds of winning on this Spanish National Lottery - Loteria Nacional - draw are very reasonable when compared to many of the lotteries out there, especially considering how many people tend to participate in Spain’s lottos.

The chances of you winning a jackpot on the El Gordo Primitiva are 1 in 31.62 million – for these odds you could be one of the lucky jackpot winners by matching the 5 main numbers plus the Additional Number.

For one of the prizes on the second level for matching the 5 main numbers – the odds come in at 1 in 3.5 million.

Winning odds for the ninth and final level of prizes for matching only the Additional Number are just 1 in 10.

With jackpots for the El Gordo de la Primitiva starting off each week at €5 Million – the biggest jackpot won to date has been a massive €33.02 Million which was won on August 14th 2011.

The second highest jackpot won so far on the El Gordo Primitiva has been €27.15 Million which went to a lucky winner in Tazacorte on the island of La Palma in the Canary Islands in March 2008.

The third highest jackpot won on this Spanish lottery game has been €26.21 Million which was won in April 2007 by a player in Monteagudo, Murcia.

If you win the lottery with any of the games offered by Loterias y Apuestas del Estado and the Loteria Nacional including the El Gordo Primitiva you will be paid your winnings as tax free cash lump sums.

There are various criteria depending upon where you buy lottery tickets from – a Loterias del Estado retail outlet on the streets in Spain or online from an authorized lottery ticket sales company such as TheLotter.

You will not need to be concerned about the size of your win or having to contact the company if you play lottery online as when you win the lottery your agent will make payment direct to you when you buy lottery tickets online.

Click Here to Read about the Loteria Nacional SUPERDRAWS

Click Here to PLAY in an EL GORDO Syndicate NOW