"BonoLoto – 4 draws Every Week from the Spanish Lottery"

The Spanish Lottery is one of the oldest lottery companies on the planet and offers players numerous games to play that are some of the most popular in the world – including the Bono Loto.

Spanish National Lottery games are organized by Loterias del Estado (ONLAE) or to give it the full title – Loterias y Apuestas del Estado – and is run by the Government of Spain.

The Loteria Nacional – Spanish Lottery – has been around in some form since way back in 1763 meaning that today Spanish Lotto games in general are incredibly popular and a massive percentage of the Spanish population play lottery games in some form or other.

One of the noteworthy philosophies of the Spanish National Lottery has always been to spread the wealth amongst as many people as possible and to this end – around 70% of monies generated through its lottery ticket sales – goes straight back to Spanish Lotto players in the form of prizes.

The Loteria Nacional – Spanish National Lottery – offers various games for you to play including the popular Sunday 5/54+1/10 draw El Gordo de la Primitiva, the La Primitiva (Loteria Primitiva) 6/49 game on Thursdays and Saturdays, the National Lottery draw itself Loteria Nacional, the massive Christmas Lottery – El Gordo (Loteria de Navidad) and the game which we shall be looking at in greater detail here – the BonoLoto – a 6/49 game that is played 6 times a week…

The BonoLoto is one of the numerous games in the Spanish Lottery portfolio of lottery games – and is highly popular throughout Spain, the rest of Europe and even further afield.

The Bono Loto was first drawn back on February 28th 1988 and has been a mainstay of the Spanish Lottery portfolio ever since and is played four times every week.

The BonoLoto jackpot generally starts off at €400,000 and will rollover each time it is not won meaning that it will steadily rise up to 6 times every week until there is a jackpot winner.

The lotto draw for the Bono Loto takes place on these 6 days at 9.30pm CET (Central European Time).

BonoLoto – How It Works

The BonoLoto – from the Spanish National Lottery – uses a single matrix of 6/49 the same as the Loteria Primitiva and many other lottery games around the world.

This means that when you Play BonoLoto you will need to choose 6 lottery numbers out of a range of numbers from 1 to 49.

When the Spanish Lotto make the lottery draw for the Bono Loto they use a single drum to select the 6 winning lottery numbers – after which they draw a seventh number – the bonus number which is there to determine winners on the second prize category.

If you successfully match all 6 winning lottery numbers you will be the lucky winner of a Bono Loto Jackpot prize.

In addition to the Bono Loto jackpot, there are 4 other ways in which you can win on this Spanish Lottery game, meaning that there are a huge number of prizes to be won 4 times each week.

A Quick Pick / Lucky Dip option is available when you play Bono Loto – similar to other Spanish Lotto games and most other lottery games around the world such as the EuroMillions, UK Lotto and all USA Lottery games. This will allow you to ask the computer or retailer to pick your lottery numbers for you automatically using its random number generator.

So, playing the Bono Loto from the the Spanish Lottery is very easy – just select you own 6 numbers or let the computer or lottery terminal do it for you using the Quick Pick / Lucky Dip facility.

BonoLoto – Who Can Play? 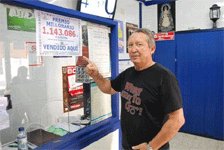 In the past only residents of Spain were allowed to play in any of the Loterias y Apuestas del Estado – Spanish Lottery – games including the Bono Loto. You used to have to purchase your Spanish lotto tickets from an authorised lottery agent based in mainland Spain itself.

Today though, this is not a problem as there are numerous online lottery ticket sales agencies such as TheLotter who are both genuine and fully authorized – you are able to select your Bono Loto numbers online and purchase your tickets from absolutely anywhere in the world.

This is good news of course if you are living outside of Spain yet still want to Play Bono Loto and ensure your entry into the next draw or simply want to have the ease and convenience of being able to buy lottery tickets online. .

Once you have entered into your Bono Loto lottery draw, you can then easily check the BonoLoto Results here to see how you have done and to find out if you have become one of the lucky lottery winners.

You will need to be 18 years of age to be eligible to purchase a ticket for any of the Spanish National Lottery games including the Spanish Bono Loto. 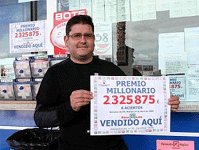 The Bono Loto is drawn by the Spanish National Lottery at 9.00pm CET six times every week on Mondays, Tuesdays, Wednesdays, Thursdays, Fridays and Saturdays.

You can find the BonoLoto Results in various different ways to check your lottery ticket and see if you have been lucky with the Bono Loto winning numbers drawn.

You can check the latest BonoLoto Results at any time by clicking the link here or watching Spanish Television Antena 3 where they will be broadcast following each draw.

The Spanish Lottery Results for the Bono Loto game will also be available on various radio stations on draw nights as well as appearing in numerous local newspapers plus they will be displayed on the official website – loteriasyapuestas.es. 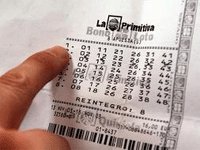 The odds of winning with the Bono Loto are very good when compared to many lotteries around the world and with 5 different ways to win on this Spanish Lotto – this means that there are plenty of prizes to be won four times each week.

For one of the prizes in the second category – the odds come in at a much better 1 in 2.33 million for matching 5 of the main Bono Loto numbers plus the bonus number.

Your chances of winning a third division prize come right down to 1 in 54,201 for matching 5 of the main Bono Loto numbers.

For a fourth division prize the odds of winning are 1 in just 1,032 for matching 4 of the main numbers.

For a fifth division prize your odds of winning are 1 in 57 for matching just 3 of the main Bono Loto numbers. 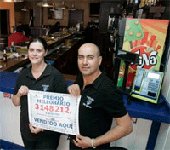 The 3rd biggest Bono Loto jackpot win so far was also in excess of € 7 MILLION and was won by a single ticket back in 1990.

As it is drawn 6 times every week it will surely only be a matter of time before the Bono Loto jackpot creates another record winner.

With the Bono Loto jackpot starting off at €400,000 the top prize regularly reaches into a figure of several million Euros. .

BonoLoto – How Prizes are Paid 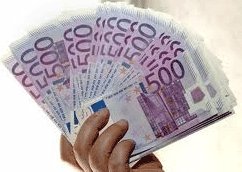 If you win the lottery with Loterias Y Apuestas del Estado / Onlae – including the Bono Loto – you will be paid your lottery winnings as a tax free lump sum payment.

There are various criteria involved depending upon where you buy lottery tickets from – a Loterias y Apuestas del Estado lottery retail outlet on the streets in Spain or online from an authorized lottery ticket sales company such as TheLotter.com.

You needn’t worry if you Play Lottery Online with one of the genuine and authorised online lottery ticket sale companies like TheLotter – as part of their role is to look after all these details for you – making sure that you receive your Spanish Lotto winnings directly and quickly.

BonLoto – Where the Money Goes

Spanish Lottery proceeds – including those for the Bono Loto – are generally split between prize monies for the lottery games and good causes.

Around 70% – more than most other world lottery companies – is returned to players in the form of lottery prize money with the rest going towards the Spanish state helping with the likes of housing, health, education, community and cultural development as well as covering administrative expenses.

Further information on some of the OTHER great Spanish Lotto DRAWS…

Click Here to Read about the Loteria Nacional SUPERDRAWS

Click Here to PLAY in an EL GORDO Syndicate NOW