The Washington Lottery was created in 1982 with the aim of generating some very welcome income for various state programs via monies it would raise from sales of its lotto tickets & is run by the government of the state of Washington.

In addition to this – the Washington State Lottery is an active participant in causes that help to raise awareness about the risks that are evident due to problem gambling throughout Washington.

As well as this – the Washington State Lotto partners with Page Ahead – a not-for-profit organization that supports literacy at home for low-income families with children by providing  book donations.

The Washington Lottery also became a member of the MUSL – the Multi State Lottery Association – on January 31st 2010 and have included the Powerball lottery in its range since it joined.

Apart from the Multi State Mega Millions and Powerball, the WA State Lottery range includes, Hit 5, Match 4, Daily Game, Keno, & the game we shall take a look at here – the Washington Lotto.

Jackpots for the Washington Lotto start off at US$ 1 MILLION and rollover each time they are not won. The resulting increase is then added onto the following draw’s jackpot which will rise in size each game until somebody eventually wins the jackpot prize. It will then revert to the starting top prize sum of US$ 1 MILLION once again.

The Washington Lotto uses a single matrix configuration of 6/49.

Washington State Lotto – How it Works 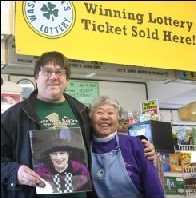 The WA State Lottery Lotto uses what’s called a 6/49 matrix for its Lotto game – which means that when you are playing the Washington Lotto you will need to select your 6 numbers out of a range of numbers from 1 to 49 – if you correctly match all 6 of the winning lotto numbers drawn then you will be a lucky winner of the Washington Lotto jackpot 1st prize.

In addition to the jackpot itself – there are 3 more ways in which you can win this WA State Lottery – with prizes to be won on the WA Lotto if you successfully match 5 of the 6 winning numbers drawn, 4 of the winning numbers or even just 3 of the numbers.

A Quick Pick facility is available when playing the Washington Lotto very much the same as the Lucky Dip option that is used in the UK National Lottery or Europe’s EuroMillions or many other USA Lottery games – meaning that you can ask your computer or retailer to randomly pick your Washington Lotto numbers for you.

When playing the Washington Lotto you will need to select 2 sets of 6 numbers as you will receive 2 entries each time that you play.

So playing the Washington Lotto is simple – you just choose your own 2 sets of 6 numbers or use the random number generator Quick Pick facility to have them automatically selected for you.

The cost of entry into the WA State Lottery – Lotto – is US$ 1.00 & for this you get 2 separate plays meaning 2 chances of winning.

Washington State Lotto – Who Can Play? 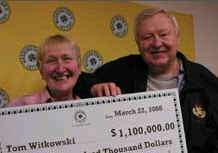 Nowadays though – there are a great number of online lottery ticket sales agencies such as SmartWinners or TheLotter who are both authorized & accredited – you are easily able to select your Washington Lotto numbers online & purchase your lottery tickets without being concerned about where in the world you live.

This is great news of course if you live outside of Washington  & the USA but still wish to play the Washington Lotto & ensure your entry into the next drawing or just want to have the convenience & ease of being able to buy lottery tickets online for the WA Lotto.

You will need to be 18 years of age to be eligible to purchase a ticket for a WA State Lottery game including the Washington Lotto.

Some great news here for all USA Lottery players in Washington...

This means that with effect from January 31st 2010 – in addition to the existing
MEGA MILLIONS – USA Lottery players in Washington will now ALSO be able to buy lottery tickets for the POWERBALL. You can still buy lottery tickets online, of course, from anywhere around the world.

You can check all Washington Lotto results from any retailer's Check-A-Ticket machine in the state or in the daily newspapers.

The winning Washington Lotto numbers and WA Lottery results will also be made available on the official website of the WA Lotto – walottery – very soon after each of the draws have been made.

The odds of winning on the WA Lotto are extremely competitive when you compare them to many of the USA lotteries – especially the Multi-State Mega Millions & Powerball games.

The chances of winning a WA State Lottery jackpot prize are 1 in 6.99 million – for these lottery odds you could be one of the lucky Washington Lotto jackpot winners.

For one of the Washington Lotto prizes on the second level – the odds are 1 in 27.1 thousand for picking 5 of the winning numbers

The overall odds of you winning any prize in this WA State Lottery draw are a very reasonable 1 in 27.1. These are good overall odds for a game that produces thousands of winners every single week. 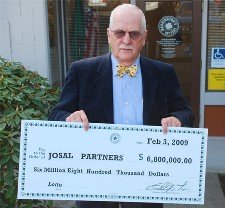 The largest jackpot won to date on the Washington Lotto has been a huge US$ 32 MILLION that was won on October 25th 2000 and split between 3 WA Lotto players.

The 2nd biggest win so far on the Washington Lotto occurred when a player from Brier, who had elected to remain anonymous, claimed the exciting jackpot amount of US$ 12.2 MILLION on July 3rd 2019.

US$ 9.7 MILLION stands as the 3rd highest WA Lotto jackpot won to date when winners from Everett struck lucky on July 26th 2008.

.On December 10th 2008 – the Washington Lotto produced its 4th biggest jackpot payout when US$ 8.9 MILLION was won – once again by ticket holders in the Everett region of Washington State.

The Josal Partners achieved another big win on the WA Lotto on February 5th 2009 having scooped a cool US$ 6.8 MILLION. 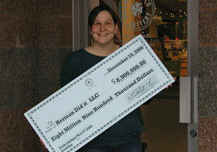 As the winner of a WA State Lottery jackpot – you have a choice in how you would like to receive your prize money. You could choose to take it either as a single cash lump sum or as an annuity prize payment option.

You will need to make the choice as to whether you wish to receive either the cash lump sum option or the annuity installment payments option within 60 days of making your winning claim. If you have not made a decision – after the 60 day period the jackpot win will automatically be paid as an annuity.

In terms of monetary value – if you had chosen to take the cash lump sum payment for your Washington Lotto jackpot win – you would receive approximately 50% of the annuity value that you would otherwise have been remunerated in yearly installments.

If you choose to receive your jackpot win as an annuity – it will be paid to you in yearly installments over a time period of 25 years.

You need to make your claim within 180 days of the winning draw.

If your Washington Lottery win is up to US$ 600 – you will be able to claim your prize from any WA State Lottery retailer in the state.

If your win is more than US$ 600 – then you will need to claim your prize from any of the Washington Lottery regional offices.

If you are a jackpot winner – you will need to make your claim by telephoning a WA State Lottery office & arranging an appointment.

If you play lottery online this will be no concern for you as your lottery ticket sales organization will take care of all these details – whether this is SmartWinners, TheLotter or any other company.

Many different bodies and programs benefit from funds generated by people buying tickets for the Washington State Lottery games.