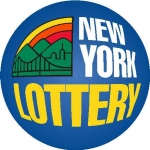 One of the largest, most popular and certainly one of the oldest US Lotteries is the New York Lottery.

It started off in 1967 after New York citizens voted in favour of a state-run lottery in 1966 with the promise that funds generated would be used to support education within the state of New York.

Since its beginnings in 1967, the New York State Lottery has produced hundreds of winners and generated more than $34 billion in support of the local education infrastructure.

The New York Lottery can proudly boast that it has the highest sales figures out of all the state lotteries in the USA.

The NY Lottery is part of the Multi State Lottery consortium that offers the Mega Millions game and has various other lottery games within its portfolio including the Powerball – since the coss-selling agreement of January 31st 2010 – the New York Lottery Sweet Million, Take 5, Numbers, Win 4, Quick Draw, Pick 10, various instant scratch-off games and its own primary state lottery game, the New York Lotto which we will be looking at in full here…

The New York Lotto uses what’s known as a 6/59 matrix which means that when playing the Lotto, you need to select 6 numbers from a pool of balls numbered 1 to 59 – if you match all 6 numbers drawn then you will be a jackpot winner.

The NY Lotto actually draws a seventh number called the “Bonus” number which is drawn to determine the winner of the second prize.

To win this second prize you need to match 5 of the first 6 numbers drawn PLUS the “Bonus” number.

A “Quick Pick” facility is available to save you time when playing the NYS Lottery similar to the “Lucky Dip” that is used in the UK National Lottery or Europe’s Euromillions – which means you can get the computer terminal to randomly select all your New York Lotto numbers for you.

If the jackpot is not won then the first prize pool money “rolls over” and is carried forward by being added onto the next New York Lottery jackpot.

Even the 2nd Prize Rolls Over!

After entering into the Lotto you can check your NY Lottery numbers by watching the draws on TV which take place on both Wednesdays and Saturdays at 23.21 local time.

As in most US Lotteries previously, only citizens living in the State of New York were allowed to play in any of the New York Lottery games including the New York Lotto - you would have had to purchase your lottery tickets from an authorized retailer based in New York.

Now, however, with the welcome presence of authorized and authentic online lottery ticket sales agencies like TheLotter you are able to select your NY Lottery numbers online and purchase your NY Lotto tickets with no worries at all about where in the world you may be living.

Great news if you live outside of New York and the U.S.A. and want to have a go at the NY Lottery and guarantee your entry into the next draw or just want to have the convenience of being able to buy lottery tickets online.

Once you have entered into the NYS Lotto, after the draw you can then easily check the New York Lottery results online to see how you have fared and to find out if you have become one of the many New York Lotto winners.

You must be 18 years of age to be eligible to purchase a ticket for any of the New York State Lottery games including the New York Lotto.

Some great news here for all USA Lottery players in New York...

This means that with effect from January 31st 2010 – in addition to the existing
MEGA MILLIONS – USA Lottery players in New York will now ALSO be able to buy lottery tickets for the POWERBALL. You can still buy lottery tickets online, of course, from anywhere around the world.

The New York State Lottery introduced the New York Lotto game in 1978 and the very first draw took place on November 11th and had a jackpot prize of a quarter of a million dollars.

The New York Lotto is the official lottery for the state of New York and regularly produces jackpots that reach into the multiple millions of dollars.

Plans were announced in September 1983 to increase the New York Lotto draw to twice per week and produce larger prizes.

To make the draw itself, the New York Lottery uses a single ball machine with balls ranging in numbers from 1 to 59.

The starting figure for the New York Lotto jackpot is usually $3 million which,of course, increases in size each week the jackpot is not won.

You can watch the NY Lottery draws take place live on television on Wednesdays and Saturdays at 11.21pm on WABC Channel 7.

The NY Lottery results will also be displayed on the official Lottery New York website – nylottery.ny.gov – shortly after the draw has been made.

The odds of winning on the NY Lottery – New York Lotto are pretty average when compared to many of the lotteries out there in the world and certainly better than those offered in the Multi State lottery games such as Mega Millions and Powerball.

The chances of matching all 6 numbers and winning a New York Lotto jackpot are 1 in 45.05 million – for these odds you could be one of the NY State Lotto jackpot winners.

For one of the prizes on the second level, the odds come right down to 1 in 7.50 million.

The likelihood of winning a third tier prize comes in at 1 in 144 thousand and for a prize on the fourth tier the odds are reduce right down to just 1 in 2179.

You can also win prizes on the fifth tier of the New York Lottery – Lotto – and the odds for this level of prize come in at just 1 in 96. 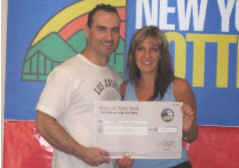 The overall record New York Lotto jackpot to date is the massive US$ 72 Million top prize won on May 31st 1997 and shared between 4 winning tickets.

The 2nd biggest NY Lotto jackpot to have been won so far is the US$ 65 Million won on June 30th 2007 by Degli Martinez from Queens which still stands as the biggest single ticket win.

The US$ 58 Million NY Lotto jackpot win of May 2004 was the biggest win on a single ticket at the time and the 3rd largest in NY Lottery history.

Other big wins on the New York Lottery flagship game are as follows...

On May 12th 1984 the richest to date New York Lotto jackpot was produced when four winning tickets shared a jackpot of US$ 22.1 Million.

As at 1985, the largest jackpot to be won on the New York State Lottery was US$ 41 Million. This was divided between 3 winning tickets including a group of 21 factory workers from Mount Vernon.

Pasquale Consalvo of Staten Island became the lucky winner of the largest single ticket jackpot win on the NY Lottery in January 1986 scooping a fantastic US$ 30.5 Million.

In December 1988 the New York Lottery jackpot rose to US$ 45 Million from $26 million after no one had picked the winning numbers. It was won by 12 winning lottery ticket holders. 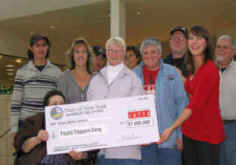 As an New York Lotto jackpot winner, you would have a choice in how you wish to receive your winnings. You could choose to have either a single cash lump sum payment or an annuity prize.

You will need to make the choice as to whether you wish to receive the cash lump sum option or the annuity installment payments option within 60 days of making your winning claim.

You will need to mark on the NY Lottery playcard whether you would like to receive your winnings as either a cash lump sum or in annuity payments.

If you choose to receive the jackpot as an annuity, it would be paid to you in yearly installments over a 26 year period.

The annuity option with the New York Lotto itself differs from many other U.S.A. lotteries in that the payments are not equal each year but are graduated. Every year the payment is slightly higher than the previous year.

In terms of value, if you chose to take the cash lump sum payment as an NY Lottery jackpot winner, you would receive approximately 50% of the annuity value that you would be paid in installments.

If you play lottery online however, whatever your win, this will not be a concern for you, as your accredited lottery ticket sales agency will take care of all this for you, whether it is TheLotter or whichever company you may use.

NY Lottery – Where the Money Goes

As with many of the US Lotteries, all revenue earned by the New York Lottery games is channeled into supporting education with the State of New York.