The origins of the Turkey Lottery go way back to 1889 when the first Turkish Lottery game was organized. This was followed in 1890 when a Piyango – which meant a lottery using black and white cards – was introduced with a jackpot of TL7100.

The current Turkish Lottery games are organized and administered by Milli Piyango which was founded in 1939 and means State Lottery. The MilliPiyango is the Turkish National Lottery Administration which is the responsibility of the Turkish Prime Ministry and the only body authorized to operate lotteries in Turkey.

The Milli Piyango from Turkey also operates in the land-locked former USSR country of Kyrgyzstan.

Together these 2 organizations work with many of the greatest world lottery companies making sure that all global lottery games offer the best possible service to the playing public throughout the countries that they serve.

Milli Piyango offer various Turkish Lottery games in their portfolio including the Sayisal Loto 6/49 which is the most popular, the Milli Piyango itself, Sans Topu, On Numara and the Turkey Lottery that we will be reviewing here – the Super Loto 6/54...

The Turkish Lottery – Super Loto 6/54 – is a very recent game and was first launched when the very first draw took place on October 19th 2007.

The Super Loto is one of the most popular and most played out of all the Turkey Lottery games that are offered to you by the Turkish National Lottery Administration – Milli Piyango.

The Super Loto 6/54 is a traditional draw-style, jackpot lottery game and is one of the premier Turkey Lottery games offered by MilliPiyango, the national lottery and gaming company in Turkey.

Jackpots for the Super Loto commence at approximately TL1.1 Million and each week that the Turkey Lottery jackpot is not won, it will rollover and be added onto the jackpot for the next draw.

Interestingly, there is no limit to how many times the Super Loto can rollover making for some very exciting and much larger lottery jackpot figures that can be won.

Draws for the Turkish Lottery 6/54 take place every week on Thursdays at 8.30pm Turkish Time.

We are very pleased to have reviewed the Super Loto 6/54 from the Turkish Lottery and would highly recommend taking a good look at how it works below... 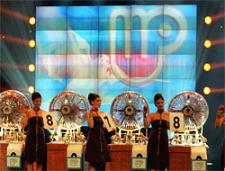 The Super Loto uses a matrix of 6/54 which means that when playing this Turkey Lottery game, you will need to select 6 numbers out of a pool of balls numbered from 1 to 54.

If you match all 6 of the main numbers drawn then you will be a winner of the first division prize – the Super Loto jackpot.

In addition to the jackpot itself, there are 3 further ways in which you can win on the Milli Piyango 6/54 game, which means that are a great number of prizes to be won every week for anyone who plays this game from the Turkish Lottery.

So, playing the Super-Loto is very simple indeed…just select your 6 numbers and wait for the Milli Piyango draw to take place and see if you have become one of the lucky Turkish Lottery winners.

A Quick Pick facility is available when playing the Lottery Turkey – Super Loto – very much the same as the “Lucky Dip” option that is used in the UK Lottery or Europe’s EuroMillions or nearly all USA Lottery games & Canadian Lotteries – which means that you can ask your Turkish Lottery retailer or lottery ticket sales agency to randomly select all of your Turkey Lottery numbers for you. 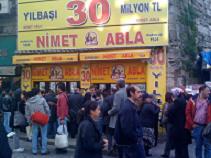 The same as the majority of world lottery games, previously only citizens of Turkey were allowed to play in any of the Milli Piyango games including the Super Loto – you used to have to purchase your Turkish Lottery tickets from an authorized lottery ticket sales retailer based in Turkey itself.

These days, though, this is not a problem as there are numerous online lottery ticket sales agents such as TheLotter who are both authorized, accredited and genuine – you are able to select your Turkey Lottery numbers online and purchase your tickets and it does not matter where in the world you may live.

This is very good news of course if you live outside of Turkey and want to play the Turkey Lottery 6/54 and ensure your entry into the next draw or simply want to have the ease and convenience of being able to buy lottery tickets online for the MilliPiyango games of the Turkish Lottery.

Once you have entered into the Loto 6/54 draw, you can then easily check the Turkish Lottery results online to see how you have done and to find out if you have become one of the lucky Super Loto winners.

You will need to be 18 years of age to be eligible to purchase a ticket for any of the Milli Piyango games including the Turkey Lottery 6/54.

The Super Loto 6/54 results are broadcast by the Turkish State owned television company TRT on Channel 1 every Thursday unless there is a jackpot rollover.

What Are The Odds? 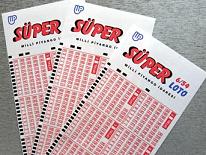 The odds of winning on the Turkish Lottery – Super Loto – are very competitive when compared to many world lotteries and there are 4 different ways in which you can win, which means there’s a lot of prizes to be won on the 6/54 game from Milli Piyango every Thursday.

The chances of winning a Turkey Lottery jackpot by matching the 6 main numbers are 1 in 25.82 million – for these odds you could be one of the lucky MilliPiyango jackpot winners.

For a prize on the second level, the odds come right down to 1 in 89,678 for matching the 5 main numbers.

The chances of winning a prize on the third level are much better again at 1 in only 1,527 for matching 4 of the main numbers.

To win a prize on the fourth level of the Milli Piyango 6/54 the odds are 1 in just 75 for matching only 3 of the main numbers. 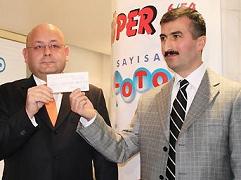 How Are Prizes Paid? 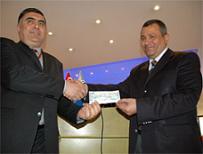 If you are the lucky winner of a Turkish Lottery jackpot, you will be paid your winnings in the form of a cash lump sum. All Milli Piyango prizes are paid out in cash.

If you have won any Lottery Turkey prize, you will need to make your winning claim within 365 days of the draw taking place before your claim will become invalid.

If you have won a Turkish Lottery prize with 3 winning numbers you will be able to claim your prize at any Milli Piyango retailer throughout Turkey who are authorized to pay winnings up to TL250.

If you have a win with 4 or 5 winning lottery numbers you may be able to claim your prize from your Milli Piyango retailer – this will be at their discretion – otherwise your winning claim will be dealt with by the National Lottery Director of the Turkish National Lottery Administration Center.

You will not have to pay any tax on anything that you win an any Turkish Lottery games apart from any that may be applicable in your own country.

The primary recipient of revenues generated by the MilliPiyango games including the Sayisal Loto and Super-Loto is the Turkish Ministry of Defence.

Another organization to benefit from Turkish Lottery funding is the Istanbul Olympic Bidding Committee (IOBC) who receive 5% of the annual net earnings.

Click here to Read about the Other Turkish Lotteries available